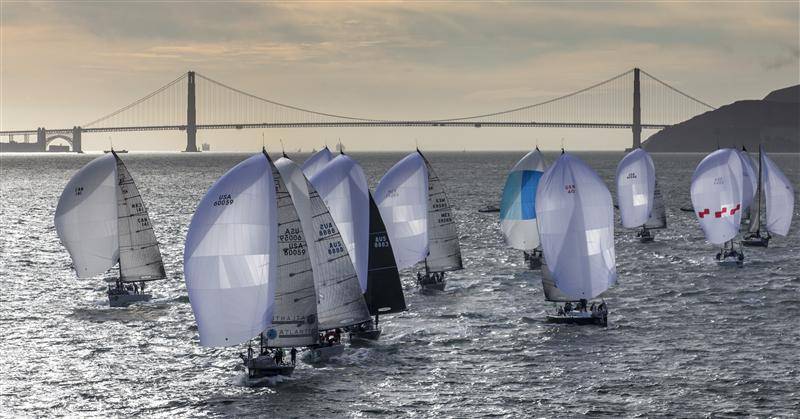 Hosted by the St. Francis Yacht Club, the 2014 Rolex Farr 40 Worlds welcomed 19 international entrants - comprising teams from Australia, Canada, Germany, Italy, Mexico, Turkey and the United States. The competition was inaugurated in 1998 and has been sponsored by Rolex since 2001.

Entrants included the defending champion - Italy’s Enfant Terrible owned by Alberto Rossi - and three helmsmen who had previously won the event. Guido Belgiorno-Nettis on Transfusion (2011, Sydney) and Helmut Jahn on Flash Gordon 6 (2012, Chicago) triumphed on home waters while Jim Richardson won a joint-record three times on Barking Mad (1998, 2004, 2009). In San Francisco, Richardson was behind the wheel of the Australian-flagged Kokomo.

Farr 40 class rules ensure fair, democratic competition. The one-design boats are stringently checked and controlled to ensure they are equal. The boat’s owner must helm. He is supported by a driven, professional tactician while the make-up of the ten-strong crew must comprise no more than four professional sailors. The formula is simple – the boat which sails best wins.

“There are many factors (why the Farr 40 boat has been a success),” explained Vascotto, a four-time winner of the competition. “When it all started it was a boat that was ten years ahead of its time. The price-quality relationship was fantastic, it was well managed and bought forward with intelligence.”

“The team element is a big part of it,” explained quadruple world match racing champion Williams. “The professionals onboard need to help the people around them achieve their best performance. It’s about building an effective team where everyone has a role and is pulling in the same direction.”

After success with Richardson on Barking Mad in 2004, 2009; Hutchinson was in pursuit of a third victory as tactician and calling the shots on Alex Roepers’s Plenty, the form team going into the competition.

“I don’t see us as the outstanding favourites,” admitted Hutchinson. “I’m cautiously optimistic but I also know the competition is really good. I certainly don’t feel like the favourite but I certainly won’t shy away from it.” “The beauty of the Farr 40 class is that it's a game of inches,” added Hutchinson. “It’s impressive how close it is - it's the 17th world championship and that is unheard of for a 40-ft boat.”

After Porto Cervo, Newport, Miami and Sydney, San Francisco maintained the tradition of the Rolex Farr 40 Worlds visiting great sailing locations. Owners and sailors alike were enthused about sailing on its bay.

A year earlier the city had enhanced its yachting reputation when hosting the America’s Cup. Great sailing waters and an iconic backdrop make a compelling combination. “I haven’t sailed before in San Francisco,” said Belgiorno-Nettis. “When I think about my hometown Sydney, these are iconic harbours. You’ve got Sydney Opera House and the Golden Gate Bridge, these are fabulous bookends if you like. It's a great experience for a sailor.”

“San Francisco is a great place to go racing, it’s tricky, there’s a lot of current, and islands around which make it quite swirly and difficult,” added Williams. “The breeze is very difficult to predict with the thermal affect and front conditions. It’s going to be a case of keeping your eyes open and seeing the opportunities.”

Roepers had spent seven years as a Farr 40 owner trying to get his hands on the coveted world title. Many felt his time had come. Plenty went into the competition as the outstanding favourite after a dominant season and a great performance in the Rolex Big Boat Series, essentially for the Farr 40s a dress rehearsal for the Worlds.

Roepers and his crew duly delivered. On the opening day, Plenty offered a master class in Farr 40 sailing. Three straight bullets left her rivals scratching their heads. It laid down an immediate marker.

The second day of competition was arguably a more typical Rolex Farr 40 day; close-fought start sequences, tight mark roundings and all round compelling sailing producing three different race winners. Wolfgang and Angela Schaefer’s Struntje Light claimed race one; Richardson used all of his experience and expertise to guide Kokomo to victory in race two while in the last race of the day, Plenty had the final word, claiming a fourth bullet.

“Last year’s average (score) was a 4.1 to win the regatta,” revealed Hutchinson. “That tells the story of what you have to do. It’s not so much the races you are in the lead, it's the races you are in tenth or eleventh at the top mark that you turn into a fifth or a sixth. It’s an 11-race series, a long regatta, and the first half of the event is purely survival and working for consistent finishes. That to me is the best part about it.”

Halfway through the competition, the pattern was set. The chasers and the chased. “We can catch up but Plenty are not showing a lot of chinks in their armour: they are fast, smart. Today (on Day 2) they were in deep positions and pulling themselves through the fleet. It’s pretty impressive. We can catch them but they need to make a few mistakes,” explained Transfusion’s Slingsby.

That blistering start would prove decisive for Plenty as only one of the scheduled five races on the third and forth days was able to take place. As the wind shut down so did the chances of an upset. So commanding was the lead going into final race of the series, Plenty was able to play it safe. Tenth place was sufficient to finish ten points clear of her nearest rival, Martin and Lisa Hill’s Estate Master from Australia.

“It has been a long time coming. I entered the class seven years ago and this is the seventh world championship I’ve participated in. To win it finally is a dream come true. It feels incredible, I couldn't be happier,” said a champagne-drenched Roepers.

“We were plenty nervous coming into the regatta. It is such a strong competition. My hat goes off to all of the other owners and the teams out there. It's a very close battle and it has been all season. We’ve been lucky to get on top through our process and determination. We look forward to building on this next season.”

Trust, friendship and long-term relationships, built over time, are one of the hallmarks of the Farr 40 class. Roepers and Hutchinson go back a long way. “Alex and I sailed together at the very first Farr 40 World Championship. Alex was the pitman/floater and I was the tactician and our relationship began then,” explained Hutchinson. “We’ve always stayed in touch and maintained a good friendship.”

The Plenty crew were rewarded for their feats with the Rolex Farr 40 World Championship title and Rolex timepiece at the award ceremony held at San Francisco’s Palace of Fine Arts Theatre.

The 18th edition of the Rolex Farr 40 Worlds will stay in California with Long Beach hosting next September. Afterwards a return to European and Australian waters is planned for the competition, which over nearly two decades has redefined teamwork, precision and fair sailing. Values which align perfectly with those of long-term title sponsor Rolex.

Video highlights from the Rolex Farr 40 Worlds are available to view here.