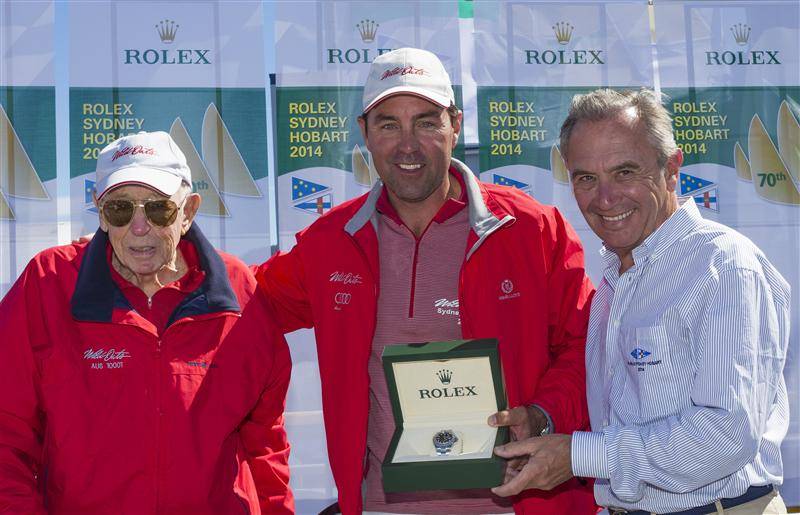 In what skipper Mark Richards described as the crew’s most hard-fought line honours triumph, Wild Oats XI held off the impressive challenge posed by Comanche, the newly-launched entry from the United States.

Completing the race in 2 days, 2 hours, 3 minutes and 26 seconds, Wild Oats XI finished eight hours shy of the race record she set in 2012. Proud owner Bob Oatley watched from the water as his boat and crew surpassed the record of line honours wins set by Morna/Kurrewa IV between 1946-1960. “It’s a miracle – and we will be back next year, yes, we’ll definitely be back next year,” exclaimed Oatley. “She is the best boat in the world; she’s proved that.”

Richards was visibly ecstatic. “This was by far the most satisfying (line honours win), we had a real race. It was long race, with a lot of competition from Comanche from the start. We worked hard from the beginning, and it paid off. It was a tough first night in the southerly as the boat sustained damage and we had to hang on in there as Comanche had the edge on us.” An edge which lasted for the first 24 hours, at which point Wild Oats XI assumed control of the race. “The key moment was crossing the light air patch in the southeast of Australia. It was important to keep as close as we could at the start to Comanche. The two boats have different characteristics and had their moments,” confirmed Spanish navigator Juan Vila. Wild Oats XI built an impressive lead throughout the second evening, at one point leading Jim Clark and Kristy-Hinze Clark’s Comanche by 40 nautical miles.

Comanche finished 49 minutes after Wild Oats XI; the crew’s first Rolex Sydney Hobart experience – coming just months after the boat’s launch – was a rewarding one. “Huge credit to Wild Oats, they deserve their record. We tried hard to take it from them. Our team did an unbelievable job,” explained skipper Ken Read. “On one hand we are disappointed, on the other, proud of what we put together.  Very rarely you go through a race like this and say in hindsight you should have done “x”. Both boats sailed a flawless race.”

Following the retirement of Perpetual Loyal during the first evening, the battle for line honours became a two-horse race. When Comanche arrived in Hobart, the third boat on the water - Manouch Moshayedi’s RIO 100 (USA) – was still some 100 nautical miles behind.

With line honours sealed, the focus now turns to the progress of the remainder of the fleet and the quest to identify which boat will become the race’s overall handicap winner and lift the coveted Tattersall’s Cup. Almost all of the fleet have now negotiated the halfway point and are set for boisterous conditions during the third night. Currently leading on handicap is the race’s smallest and oldest boat, Maluka of Kermandie, owned by Sean Langman.

Proof of the tough nature of the Rolex Sydney Hobart has been provided by the recent retirements. Both Giacomo and Wedgetail have suffered mast damage and abandoned the race.